The region produces most of the world’s banana exports — and the fungus affects the most popular commercial variety.

A banana-killing fungus that has been laying waste to crops in Asia and Australia for decades is now in the Americas, which produce the majority of the world’s banana exports.

Colombia declared a national emergency on 8 August after laboratory results confirmed the presence of the fungus, known as Fusarium wilt tropical race 4 (TR4), within its borders. This marks the first confirmation of TR4 in the Americas. The Colombia Agricultural Institute (ICA), a federal agency tasked with overseeing agricultural health in the country, says that about 175 hectares have been affected so far.

Officials quarantined four farms on the Guajira Peninsula in the northern part of the country in June, when they first suspected that TR4 was killing banana plants in the region. But scientists now fear that the fungus has spread beyond the containment zone and could threaten banana production in the Americas for decades to come. 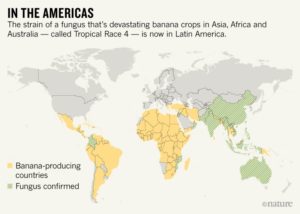 TR4 infects several varieties of banana and plantain, but is particularly harmful to the Cavendish, which is the main variety sold in grocery stores and accounts for the lion’s share of international exports.

“These epidemics develop slowly, so the [spread] will take some time,” says Randy Ploetz, a plant pathologist at the University of Florida in Homestead. “But eventually, it will not be possible to produce Cavendish for international trade.”

The TR4 strain — which started destroying Cavendish crops in Asia in the 1990s, then spread to Australia and, later, Africa — infects banana plants through the roots and spreads throughout the vascular system, starving the plant of water and nutrients. The fungus can be transmitted by moving infected plants from one area to another, or through water and soil.

It can’t be controlled with fungicides, so the main way of dealing with TR4 is to try to stop it spreading (see ‘In the Americas’). The ICA says that it has eradicated most of the plants from infected fields, but TR4 can linger in the soil for roughly 30 years.

“Soil is very difficult to contain,” says Fernando García-Bastidas, a plant pathologist at KeyGene in Wageningen, the Netherlands, who led the TR4 testing effort on the Colombian samples. “Who knows how many cars and people have entered that farm and carried [the fungus] elsewhere?” Containment efforts can slow the fungus’s spread, and Colombia is doing all it can, says García-Bastidas, but once TR4 arrives somewhere, it’s almost impossible to eradicate.