HomeNewsBananas as local product in Wageningen, the Netherlands

Bananas as local product in Wageningen, the Netherlands 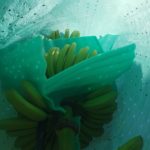 Last December Wageningen had a scoop: the first Dutch bananas were harvested in a greenhouse from Wageningen University & Research (WUR). The bananas were the result of a research project from WUR together with KeyGene, Boerenhart, Triple 20 and Chiquita.

A major problem in the cultivation of bananas is a soil born fungal pathogen that’s threatens the production of bananas throughout the world by causing fusarium wilt (also known as the Panama disease). To see whether banana plants could grow well without soil, the banana plants in this research project were taken out of the soil and grown on two types of substrates (coco peat and rock wool). The experiment was successful; the banana plants grew very well on both the artificial substrates and more important, the plants did not need any disease control. A great first step in controlling the Panama disease.

Next to the growth conditions, breeding new varieties is an important topic in the research project. Nowadays, the entire banana industry is based on one genotype: Cavendish. The lack of genetic diversity is quite dangerous as an outbreak of the Panama disease can destroy complete banana plantations. There is an urgent need for new varieties and more genetic diversity and this will be the focus during the coming years in this ambitious research project. The harvest attracted a lot of media attention, such as from Nieuwe Oogst (see below, news item in Dutch). To be continued!