KeyGene recently opened its representative office in Hyderabad India. To mark the opening of its facility, KeyGene organized a mini symposium on “ The Impact of New Breeding Technologies in Agriculture” in Hyderabad on 3rd September 2018. 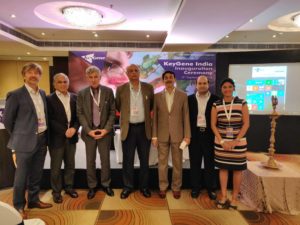 The speaker representing the seed industry was Dr. Bharat Char from Mahyco; from the government regulatory body was Mrs. Sangeeta Agarwal from the Department of Biotechnology (DBT) and from the biotechnology company was Dr. Edwin van der Vossen from KeyGene N.V.

Each of the speakers presented their views on the symposium topic and laid the foundation for a panel discussion, which was open to the panelists and the audience to deliberate and discuss.

Biotechnology is a powerful tool to transform agriculture. we need high quality biotech platforms that can work on addressing issues being faced by the Indian farmers. in that context, I welcome the decision of KeyGene to set up their facilities in India.

Ram Kaundinya, Director General of the Federation of Seed Industry of India (FSII)

The seed industry expressed that there was a critical need for technological breakthroughs to increase farm productivity, reducing cost of production and increasing farmer income. Having missed the opportunity which GM technology offers, India must judiciously decide on if/how to regulate gene editing technologies such as the CRISPR, so that it does not fail to utilize the opportunity that CRISPR has to offer. The industry also urged the Indian government to not only support the development of this technology, but also to create a policy environment for accelerated commercialization of products developed using this technology.

Dr. Arjen van Tunen, CEO KeyGene, explained the conclusion of the European court of Justice that Gene Editing mutagenesis and crop products made with this technology now fall under the GM regulations in the EU. While Japan has taken a slightly different position from both US and EU, where it will most likely not regulate or partly regulate CRISPR Cas mutagenesis. He also expressed his personal disappointment over EU’s ruling on the NBTs.

However, Dr. Arjen van Tunen remains hopeful that other major agriculture countries like India will take a positive stand to support this technology, in order to move forward and continue the development of new and better crop varieties in India and the rest of the world.

Dr. Sangeeta Agarwal representing the DBT’s regulatory point of view, expressed her concern about the less active role of the seed industry in influencing and cooperating with the government on this topic. She affirms that working together to benefit the Indian farmers is a common goal each stakeholder in the agriculture industry is working towards, hence a collaborative effort is needed to drive this decision for the Indian government. She invited the seed industry to express their voices and concerns out loud at the government level and to participate in formulating a policy paper to enable the implementation of this technology.

The session was well received by all participants and Keygene’s efforts to organise it was warmly welcomed and KeyGene was congratulated on becoming part of the Indian seed sector as a local player. KeyGene India is located in the Hitech city at Raheja Mindspace. KeyGene welcomes breeding companies and the agro food companies to visit its office and look forward to solve their challenges in the crops of their interest.