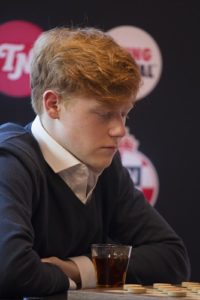 Always wanted to play draughts against a grandmaster? Now you’ve got the opportunity!

On Thursday, April 18, KeyGene and the Royal Dutch Draughts Federation (KNDB) will organize a simultaneous draughts display (simul). In this simul international grandmaster Jan Groenendijk will play against 20 opponents. KeyGene, sponsor of the Dutch draughts championship, offers relations the opportunity to take part in this simul with Jan Groenendijk.

This year’s Dutch draughts championship is organized in Huissen (NL), the town in which KeyGene has a 6.000 m2 research greenhouse. Therefore KeyGene financially supports this championship tournament. The tournament will take place 5-13 April 2019 and is organized by draughts club VBI in Huissen, under the authority of the Royal Dutch Draughts Federation.

A few days after the tournament, on Thursday 18 April 15:00-17:30 h, KeyGene and the Royal Dutch Draughts Federation (KNDB) organize the draughts simul in KeyGene’s research greenhouse in Huissen, as a ‘thank you’ for KeyGene’s support to the Dutch championship. 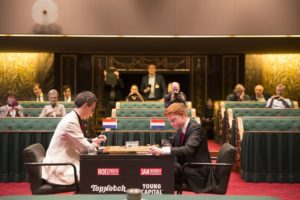 In the simul display, Jan Groenendijk, participant to the Dutch draughts championship 2019 and son of KeyGene’s researcher Hanneke Witsenboer, will play against 20 opponents at the same time. Jan Groenendijk is international grandmaster in draughts. With his twenty years of age Jan already participated in a World Championship twice: in 2015 & 2016.

The 20 places at the simul draughts display on 18 April in Huissen are open for relations, followers and employees of KeyGene.

Would you like to take your chance to play against perhaps the future world champion draughts on Thursday April 18? Send an email to Erik Toussaint before April 4 . On April 5 all submissions will receive an e-mail and hear if they can participate or not in the draughts simul with Jan Groenendijk.