Lion-Flex BV to boost the development of rubber dandelion varieties 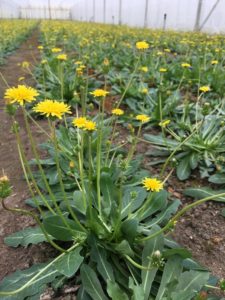 The Barenbrug family and KeyGene have joined forces to develop and produce rubber dandelion varieties and establish the sustainable production of natural rubber in Europe under the name Lion-Flex. With KeyGene contributing high yielding breeding lines, knowledge, expertise and technology, the new joint venture has a strong starting position. Lion-Flex will be able to build on and benefit from the plant breeding expertise and seed production infrastructure of the Royal Barenbrug Group.

The Dutch plant research company KeyGene has performed over ten years of studies & research into the development of rubber dandelions. This research was carried out together with partners such as Wageningen University & Research and organisations in Kazakhstan, the original habitat of the wild rubber dandelion (Taraxacum kok-saghyz).

In less than ten years, scientists from KeyGene have successfully bred from wild rubber dandelion – an undomesticated plant with low rubber yield – lines and varieties that are economically and technically (as good as) ready for production in Europe.

Sustainable economy
The Barenbrug family, owners and driving force behind the globally operating Barenbrug plant breeding company, fully supports innovation and sustainability. They recognise the value of sustainable rubber production in Europe, which is why they chose to partner with KeyGene to start up the Lion-Flex joint venture.

Lion-Flex will focus on the continued breeding of varieties of the rubber dandelion and the production of basic seed and dandelion roots in the field. The joint venture will also endeavour to find the best extraction method to efficiently extract rubber from the roots as well as starting to define the ideal sales channels. The hiring of the first dandelion breeder has already begun.

Global market
The demand for natural rubber is increasing worldwide. Rubber is currently still mainly derived from rubber trees, the acreage of which can only be expanded by converting rainforest into agricultural land – an unsustainable approach in the long run. In addition, cultivation is threatened by leaf blight, a fungal disease that to date remains limited to South America.

All these factors create insecurity with regard to availability and pricing, the risk of shortages and potentially unsustainable solutions involving the continued destruction of rainforest. This was the reason why the European Union funded research into alternative sources for natural rubber between 2008 and 2018. During this period the collaboration of universities, institutes and companies, with additional investment from KeyGene, was able to ensure that only a relatively small step now remains to be taken, in order to develop market-ready rubber dandelion varieties.