An international research collaboration has successfully assembled the complete genome sequence of the plant pathogen that causes the devastating disease Asian soybean rust. Given the importance of this disease challenge and the size of the pathogen’s genome, KeyGene decided to support the research consortium by making its PromethION DNA sequencing machine and its sequencing and bioinformatics experts available pro bono.

The research results mark a critical step in addressing the threat of Asian soybean rust. The disease is caused by the genetically-complex and highly-adaptive fungus Phakopsora pachyrhizi. This fungus has one of the largest genomes of all plant pathogens. Asian soybean rust has a devastating impact on soybean, an internationally important crop with 346 million tonnes produced globally. 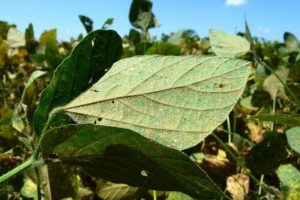 In conditions favorable to its spread, the rust can destroy up to 90% of the soybean harvest. At present soybean growers in major areas of cultivation such as Latin America must use chemicals to protect crops.

The largest producer of the soybean is Brazil, where the combined cost of losses and disease control measures is US$ 2 billion per season.

The new database comprises three genome sequences, from three isolates (K8108, MG2006 & PPUFV02) of which PPUFV02 has been assembled at chromosome level detail, thanks to the support by KeyGene. These three genomes will be hosted by the Joint Genome Institute and will be made available during October 2019.

All three genomes will be repeat masked and annotated in the same way, to facilitate direct comparisons and inferences for the community. This will enable researchers to study the molecular mechanisms of the pathogen, paving the way for breeding and engineering of disease-resistant crops.

The soybean rust pathogen is highly adaptive and disease resistance genes present in soybean have been overcome rapidly, and the pathogen is building resilience against the current generation of fungicides. These two factors leave few solutions for controlling the disease in the field.

Two of the three isolates that the consortium has sequenced are from Brazil, where the impact of soybean rust is a huge problem for farmers.

Phakopsora pachyrhizi has a highly complex genome, and it is 60 times bigger than the yeast genome, composed of 93% repetitive elements and possesses two nuclei. This complexity has delayed progress on the sequencing of this pathogen and meant that high-end, next‐generation sequencing technologies were required to complete the task.

Given the importance of this disease challenge and the size and complexity of the pathogen’s genome, KeyGene made its Oxford Nanopore PromethION ultra-long DNA sequencing machine (an industry first) and its sequencing and bioinformatics experts available pro bono. Using a subset of reads of at least 51 Kb, a high-quality assembly with an N50 contig size of 654 Kb was produced, a significant improvement over earlier efforts. This initial assembly allowed Dr Yogesh Kumar Gupta from the 2Blades group to generate a chromosome level assembly of the isolate PPUFV02, of which the DNA was provided by their long-term collaborator Prof. Sérgio Brommonschenkel at the Federal University of Viçosa (Brazil).

The consortium has also generated a transcriptome atlas of all the fungal structures and infection stages of the pathogen.

“Asian soybean rust is a critical challenge for soybean growers,” said Dr Peter van Esse, leader of the 2Blades Group at The Sainsbury Laboratory, Norwich, one of the collaborators. “A chromosome level genome assembly allows the scientific community to study, in unprecedented resolution, components of the pathogen that are critical for causing disease. This is a critical first step towards the design of control strategies to combat this highly damaging pathogen.”