Scientists of KeyGene are the first to report successful application of adaptive DNA sequencing in plants, applying the Read Until tool of Oxford Nanopore Technologies. Using a combination of the Oxford Nanopore Technologies MinION sequencing device, a powerful GPU equipped computer and the Read Until software, the team was able to achieve an eightfold enrichment of 800 regions in a melon genome that were selected to be selectively sequenced.

This breakthrough will further decrease time and money needed to investigate regions in the genome that are known to be involved in important plant traits, such as fruit color, taste or resistances to pathogens. By sequencing and analyzing these regions in detail, variation can be explained and used for selections in the breeding process. In this way, improved varieties can be brought to market faster.

Adaptive sequencing allows for the selection of DNA regions to be sequenced. When a DNA fragment runs through a pore of an Oxford Nanopore sequencer, the device will generate a series of nucleotides. A powerful computer compares the generated series with the information about the regions the researcher is interested in. When the computer concludes that the fragment is not part of one of the desired regions, the pore will receive the signal to push out the DNA fragment before fully sequencing it. The pore will then be available again for the next DNA fragment in the sample.

This all happens in just a fraction of a second and requires a real-time comparison between the sequence of the DNA fragments running through all 512 pores in the sequencer, and all sequences of selected regions of interest in the plants’ DNA.

Recent research showed that it is indeed possible to selectively sequence regions of human DNA. Plant DNA has its own difficulties, such as a large amount of repetitive DNA: DNA where the same pattern of nucleotides is repeated over and over again.

That is why KeyGene scientists wondered whether they would be able to do the trick with plant DNA. They chose to use the genome of melon, of which they already knew a lot. They loaded the DNA sequence of 800 regions in the melon DNA they wanted to be selectively sequenced. So the computer needed to continuously compare all 512 DNA fragments in the pores of the sequencing machine with the 800 regions of melon DNA stored in the memory of the computer.

The team was indeed able to better use the sequencing capacity of the DNA sequencer for the regions of interest. They were able to make an eightfold ‘enrichment’.

The success will make it easier and less time consuming when one wants to compare important DNA regions among different genotypes of plants. Sequencing expert Alexander Wittenberg: ‘‘Read Until is a fantastic application that requires no specific sample preparation, opens new possibilities in crop innovation research and reduces costs.”

Graph: The 800 desired regions of melon DNA were much more often sequenced when using the Read Until tool (green dots) compared to a non-selective sequencing (purple dots) 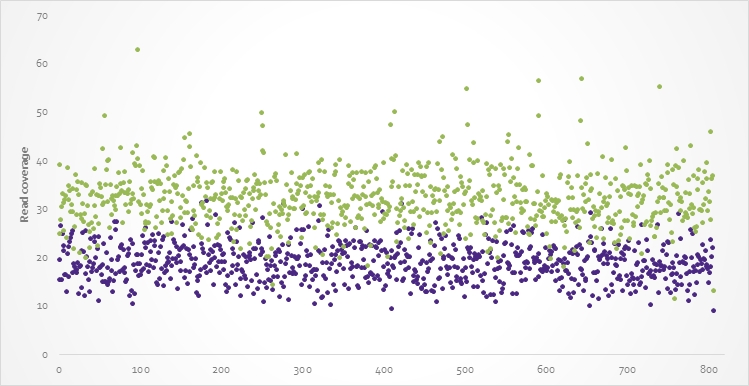 In order to allow other scientists to benefit from the work and the findings at KeyGene, the team made a ‘White paper’, describing the approach and results in more detail.

At KeyGene, the findings will be used for the development of innovations for the agro-food domain.

Would you like to learn more about the perspectives of using Read Until or other Next Generation Sequencing research at KeyGene? Contact Alexander Wittenberg