This week KeyGene researchers generated 76 gigabases of DNA sequence of a lettuce (Lactuca sativa) genome with a single Oxford Nanopore Technologies (ONT) PromethION flow cell. This is a new record in the plant genome sequencing area for long reads. As the PromethION has the capacity to run 48 such flow cells, large-scale de novo whole genome sequencing will soon be feasible. KeyGene expects that PromethION’s long reads and low costs per base will disrupt the current sequencing field, accelerating crop innovation. 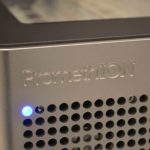 The nanopore sequencing of the lettuce genome was completed for KeyGene’s partners Rijk Zwaan, Enza Zaden, Limagrain Vegetable Seeds and Takii & Co, which use the genome sequence to support the development of new varieties. Lettuce is an important vegetable crop with a complex genome of approximately 2.7 gigabase pairs (Gbp). The output of 76 gigabases generated by KeyGene with a single PromethION flow cell thus represents approximately 30-fold genome coverage. The N50 reads lengths were 29 kb with a fair amount of reads longer than 100 kb. With these very long DNA sequences the assembly of complex genomes becomes much easier.

KeyGene has always been frontrunner in the application of new sequencing technologies for crop improvement and believes that long reads are crucial to generate high quality reference genomes. Since its introduction in 2014, KeyGene used ONT’s MinION to sequence plant pathogens, BACs and amplicons. PromethION and GridION now open up the way to large scale whole genome sequencing of complex crops like lettuce and others.

“The record sequence output is due to recent improvements from Oxford Nanopore Technologies, as well as advances made by KeyGene in high-molecular weight DNA isolation and sample preparation. We are excited about our ability to sequence truly complex plant genomes with ONT’s platforms in just a few days. De novo whole genome sequencing will be the standard going forward.”

“Congratulations to KeyGene for achieving this result on a single PromethION Flow Cell, and the work that KeyGene has been doing on plant DNA extraction and preparation to enable these results.  Internally we have recently been achieving more than 150Gb per PromethION Flow Cell, so we are excited about the pathway to even more nanopore data for our customers.”